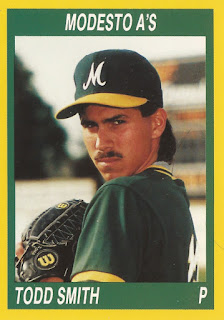 Todd Smith couldn't hold that Southern Oregon lead in July 1989, but he stayed with it.

Called on in the ninth inning, two men on, Smith gave up a double, grounder and then threw a wild pitch allowing opposing Eugene to tie the game, according to The Eugene Register-Guard.

The game eventually went 15 innings, with Southern Oregon losing the game. Smith went 2.2 of those innings, charged with just the tying run, according to The Register-Guard.

Smith was in his first season as a pro that year with Southern Oregon. He went on to see time in four seasons. He never saw time above AA.

Smith's career began as a 10th-round selection by the Athletics in 1989, taken out of Lassen College in California.

He played his first year at short-season Southern Oregon. He got 21 relief outings, picking up three wins and five saves. His ERA came in at 3.45.

His time at Southern Oregon also earned him the respect of his rivals. Spokane pitching coach Kevin Towers called Smith in August "one of the best short men in the league," according to The Spokane Spokesman-Review.

Smith made AA Huntsville in 1992, but it was his last season as a pro. In five outings, eight innings, Smith gave up five earned, ending his career.