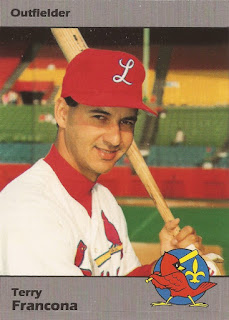 Managing the Cleveland Indians in 2017, Terry Francona missed 18 days due to a heart issue.

For Francona, those 18 missed games were 18 too many, he told USA Today.

"I hate missing games," Francona told the paper. "They're almost sacred. Even once they found out what it was, I was like, 'Let's do it and get it over with. I'm not sitting around here. So you're either doing it tomorrow or I'm going back to work.'"

Francona has been a worked hard in baseball for more nearly four decades. He saw games over 10 major league seasons as a player - 708 in all.

He then went on to see games as a coach and manager, including managing some of the most meaningful games in a city's history - as he did what seemed impossible, took the Red Sox to two World Series titles.

Francona's long career in baseball began in 1980, taken by the Expos in the first round of the draft out of the University of Arizona.

He started with the Expos at AA Memphis. He then moved to AAA Denver for 1981. He also made the jump to Montreal.

Francona played five seasons for the Expos, getting into 100 games in two of those. But knee injuries marred his time and Montreal released him to start 1986. He played that year with the Cubs and 1987 with the Reds.

As he worked to make the Indians for 1988, Francona spoke to The Los Angeles Times about returning from injury and finding a new team.

"There's not a lot of stability in this job," Francona told The Times, "and it gets a little depressing at times. But there are enough rewards. It's a nice way to make a living."

He briefly tried a new career in real estate, but soon came back to the game in 1991 as a hitting coach for the White Sox in the rookie Gulf Coast League.

Francona then took his first managerial job in 1992 at single-A South Bend. He then spent three seasons managing AA Birmingham - managing Michael Jordan along the way.

He returned to the majors for 1996 as a coach for the Tigers. He then took his first major league managerial job for 1997, with the Phillies. After four generally lackluster seasons helming the Phillies, and then serving as a scout for the Indians and bench coach with the Rangers, the Red Sox hired him to manage for 2004.

"I always felt like if I put the players and the organization first and myself second, things would work out," Francona told reporters after being named the new Red Sox manager. "And you know what? I'm sitting here in front of you guys today. I feel like it's worked out."

Francona then set out to work. His club went 98-64, performed the greatest postseason comeback in history and broke the Red Sox curse.

"We just wanted to win and move on," Francona told reporters after the Red Sox' epic comeback on the Yankees. "The only we way we could move on was to do it the way we did. We know how good they are. We found a way to win the game we were playing."

Francona continued with the Red Sox through 2011, leading the team to another World Series title in 2007. In 2013, he signed on to manage the Indians and led that club to the World Series in his fourth season, falling just short of another title. He continues with the Indians for 2017.