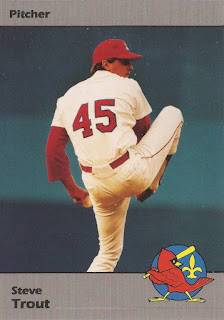 Steve Trout didn't quite live up to his potential with the White Sox, but two seasons after a crosstown trade, Trout seemed to finally be there.

In early October 1984, Trout seemed to show the world as he pitched the Cubs to within one win of the World Series.

"Trout has excellent action on the ball and today he had them beating it into the ground," Cubs' Manager Jim Frey told reporters after the 4-2 Cubs win. "When he throws strikes he can get outs as well as anyone in the league. He has improved greatly."

Trout helped the Cubs to that spot by turning in perhaps the best season of his career. He went 13-7, with a 3.41 ERA and picked up one of the two Cubs postseason victories.

Trout's career in baseball began in 1976, taken by the White Sox in the first round of the draft out of Thornwood High School in Illinois. Trout is the son of longtime major leaguer Dizzy Trout.

Trout started with the White Sox in the rookie Gulf Coast League. He moved to single-A Appleton in 1977 and got a look at AAA Iowa.

Trout stayed with the White Sox through 1982, but he never had a record of better than 11-8. For 1983, the White Sox traded him to the Cubs. He picked up the club's first win of 1983, going into the ninth against the Expos.

"I have been known to blow some leads, but luckily that didn't happen today," Trout told UPI after that win.

Trout went 10-14 for the Cubs that first year and 13-7 in 1984. After Trout's playoff win, Cubs pitching coach Billy Connors spoke to The Washington Post about how Trout had changed for the better.

"He's arrived," Connors told The Post. "He's gotten control of himself. He's matured this year. Before, he was a little kid who lived in a fantasy world, doing things he couldn't do."

Trout played with the Cubs into 1987, when he was traded mid-year to the Yankees. He then played for the Mariners in 1988 and 1989. He signed with the Cardinals for 1990 and played briefly at AAA Louiville to end his career.

Trout has since stayed in the game by starting his own academy and he's written books, a children's book and a memoir. In 2010, he served as a high school baseball coach in Hawaii.