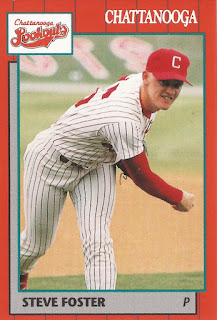 Steve Foster's shoulder got to the point in 1993 where he needed surgery. He saw it as simply a culmination of all the work he'd put in, not necessarily his work early that year, according to The Cincinnati Enquirer.

"It's not a question of being over-used," Foster told The Enquirer that June. "It's just the wear and tear on the arm, all those years closing in the minors."

Foster had the wear of six pro seasons at that point - three with time in the majors. He then underwent surgery, but wouldn't see the majors again as a player.

He has, however, returned to the bigs as a coach, continuing in 2017 as pitching coach for the Colorado Rockies. He has also brought with him, or at least others have, a story of his playing career's end that sounds good, but a story that Foster himself has to continue to knock down.

Foster's career began in 1988, taken by the Reds in the 12th round of the draft out of the University of Texas at Arlington.

Foster started with the Reds at rookie Billings. He moved to single-A Cedar Rapids for 1989 and saved 23 games. He saved another 20 at AA Chattanooga in 1990 and 22 between Chattanooga and AAA Nashville in 1991.

That August, he made Cincinnati. He got into 11 games and gave up three earned over 14 innings of work.

In early September, he gained some notoriety on a trip to Montreal. When asked at customs if he had anything to declare, according to a note that October in The Los Angeles Times, Foster said he did: "Sure, I'm proud to be an American."

Foster returned for 1992. He got into 31 games and posted a 2.88 ERA. By early September, he'd suffered an injury to his throwing shoulder throwing equipment into his truck, though he quickly returned.

Then came his 1993 campaign. He got into 17 games, with a 1.75 ERA. But his shoulder flared up again. On a Los Angeles trip, he also apparently appeared on The Tonight Show May 19.

As the story went, he appeared in a skit on the show, injured his shoulder and ended his career, according to The Denver Post years later. Foster noted to The Post his shoulder had hurt him since that spring and he pitched that night after the show, so the show didn't end his career. (Also of note, the June 1993 Enquirer story on his impending surgery didn't appear to reference a late-night appearance at all.)

His career over, Foster then stayed in the game as a scout for Tampa Bay. He turned coach by 2005 at single-A Greensboro. In 2007, he returned to the majors as bullpen coach for the Marlins. He arrived in Colorado as pitching coach in 2015.