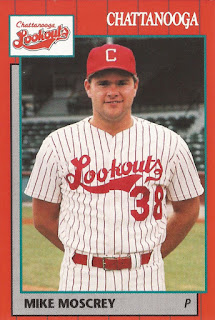 Mike Moscrey took the mound for in the 1988 Midwest League playoffs and twice came out with victories.

His second victory, according to his 1989 Best card, proved the title clincher.

Moscrey pitched those games in his third season as a pro. He got into two more campaigns. He made it to AA Chattanooga, but didn't make it higher.

Moscrey's career began in 1986, taken by the Reds in the fourth round of the draft out of Jefferson High School in Dallas.

Moscrey caught the eye of scouts after going 14-0 at Jefferson and striking out 150. One account placed him on top of the list of Dallas-area prospects.

He moved to single-A Cedar Rapids for 1987. He went 8-4 that year, with a 4.31 ERA. In the Cedar Rapids title campaign in 1988, Moscrey won 11 and lost 8 and struck out 143. He also had a hand in the division clincher, teaming with a reliever to give up seven hits in the victory.