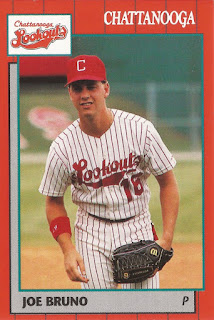 Joe Bruno made AA Chattanooga with the Reds in 1988 and, he told his hometown Pougkeepsie Journal in 1988, he believed the organization might give him further opportunities going forward.

He especially hoped he'd benefit from his role as a reliever, rather than a starter, he told The Journal.

"I like the position I'm in," Bruno told The Journal. "In this organization right now I've got a good chance to move up. I relieved all last year and it's something I'd like to be. It's my future in baseball."

Despite his hopes that summer, Bruno's future in the game consisted of just two more seasons. He briefly made AAA in 1989, but he never made the majors.

Bruno's career began in 1985, signed by the Reds as an undrafted free agent out of Columbia University. He went to Columbia out of Hyde Park, NY's Roosevelt High. He's also credited as Joseph Bruno.

At Columbia, Bruno proved a workhorse on the mound in 1985. He started 11 games, tied for ninth all-time at the school. His six wins that year remain tied for eighth all-time.

Bruno started with the Reds in the rookie Gulf Coast League. He turned in a 1.67 ERA in 10 outings. He moved to rookie Billings and single-A Cedar Rapids for 1986, spending his time in Cedar Rapids as a reliever.

He played at Cedar Rapids full-time in 1987 and shined in relief. After 36 outings, he ended with a 1.90 ERA. He won three and saved three. Bruno made Chattanooga in 1988 and continued to shine. In 40 outings, he turned in a 1.21 ERA, won seven and saved three.

Back at Chattanooga in 1989, he won six, saved 10 and had a 3.42 ERA. He also earned four relief outings - and a save - at AAA Nashville. That June, Bruno picked up the win in the league all-star game. He saw the path forward a little more crowded, according to The Journal.

"I know there's a lot of pitching in the organization," Bruno told The Journal, "but I'd Just like to see them give one of us down here a chance."

He returned to start 1990 again with Chattanooga. Injuries, though, limited his season to 20 outings and a 5.93 ERA and marked the end of his pro career.