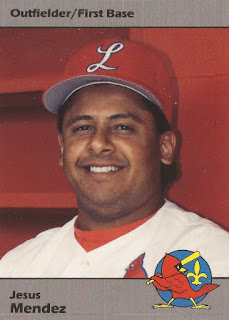 The hopeful young ballplayers tried out, but weren't good enough. And Jesus Mendez, the chief Venezuela scout for the Philadelphia Phillies, had to break the news.

"Almost all of them, I'll have to let down easy," Mendez told The Los Angeles Times in a January 2008 article. "I never tell them afterward they can't play. I tell them what they have to work on to get better."

It was as a free agent in Caracas that a young Mendez signed with the Cardinals in time for the 1986 season. His father and brother had played in amature ball in Venezuela.

His time with the national team and the Tigres would lead to his number 18 being retired, the same number he wore for Louisville in 1990. Mendez played a total of 13 seasons with the Tigres.

Mendez played with the Florida State League' St. Petersburg Cardinals for two seasons, providing some crucial plays, a bases loaded double late in a June 1986 game, a rally-stopping catch in a July 1987 game.

He made AA Arkansas in 1988 and AAA Louisville in 1989. Mendez played until 1992, but never got the call up. His Spanish Wikipedia page notes Mendez' path to the majors was blocked by the Cardinals' outfield that included Vince Coleman and Willie McGee.

Now, Mendez is working to find other Venezuelans with big league potential. In 2007, according to The LA Times, he signed six to a minor league contract for the Phillies. He observed 2,000.

"It's like gold mining," Mendez told The Times, "looking for a nugget."