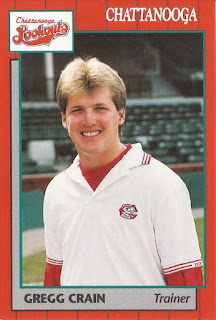 When he pointed out her knee twisting slightly out on a jump, The St. Louis Post-Dispatch wrote in a feature on knee injuries, she noted it did that running, too.

"That's probably why your knee went out," Crain assessed, according to The Post-Dispatch.

Crain worked then with a local St. Louis-area physical therapy center as a certified athletic trainer. Years earlier, he used his athletic training skills working with young professional baseball players in the minors.

Crain has since moved on to athletic training in the college ranks.

Crain's pro baseball athletic training career began with the Reds as a 23-year-old in 1989 as an assistant for the Nashville Sounds, according to his Grand Slam card.

After Nashville, Crain assumed top athletic training duties at AA Chattanooga in 1990 and then at single-A Cedar Rapids in 1991.