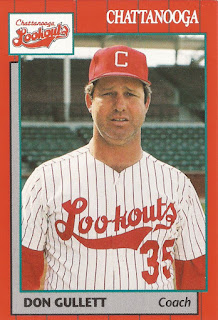 Don Gullett's time in baseball ended abruptly as a player, shut down by rotator cuff tears. What had been a career that truly had the potential to be great, had to settle for really good.

So, when he had the opportunity to return to the game in 1990 as a minor league coach for the Reds, Gullett jumped at the chance, according to The Cincinnati Enquirer.

"I definitely missed it," Gullett told The Enquirer that March. "Making it better is getting back with the organization I started out with. I'm well pleased."

Gullett not only returned to baseball, he rose quickly. Two years later, he returned to the majors as pitching coach for the Reds, a job he didn't relinquish until more than a decade later.

Gullett's long career in the the game began in 1969, taken by the Reds in the first round of the draft out of high school in Kentucky.

Gullett started at short-season Sioux Falls in 1969. He then made the jump all the way to Cincinnati for 1970.

He went 5-2 in mostly relief work for the Reds his rookie year. He picked up his first win that April as a 19-year-old.

Gullett broke out in 1971 as he turned starter. He went 16-6, with a 2.65 ERA. It marked the first of six seasons where he turned in double-digit wins.

Gullett's success with the Reds saw him sign with the Yankees for 1977 - and get a big contract.  The Yankees gave him nearly $2 million in a six-year contract.

The UPI article, however, also noted Gullett had suffered injuries already. After two seasons with the Yankees, his rotator cuff tore and ultimately ended his career.

After reentering baseball as a coach, Gullett joint Cincinnati in 1993. In all, he served in that post for nearly 13 seasons, lasting until mid-2005.

Gullett drew high praise in 1999 from his manager Jack McKeon for his ability to work with pitchers and bring about their best, according to The Enquirer.

"In all my years in baseball, there's no doubt in my mind he's the finest pitching coach I've been around," McKeon told The Enquirer. "He has the right temperament."

Gullett explained his approach in 2004 to The Chicago Tribune.