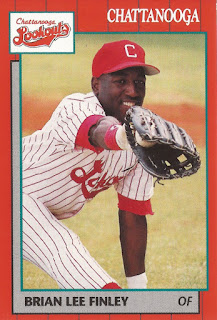 Sent to the plate in the ninth inning, a runner on third and the score tied, Finley promptly knocked a single to bring in the winning run, according to The Associated Press.

Finley knocked in that run in his fifth season as a pro. He went on to play in three more seasons. He briefly saw AAA twice, but he never saw the majors.

Finley's career began in 1982, taken by the Brewers in the sixth round of the January draft out of Contra Costa College in California. Finley was also credited by his full name, Brian Lee Finley.

Finley started with the Brewers at single-A Beloit. He hit .230 in 72 games there and stole 12 bases. He singled in an August game, before eventually getting tagged out on third.

Finley played most of 1987 at Vermont, but also got a 10-game look at AAA Nashville. He went 6 for 27 at AAA. He did largely the same in 1988. He played mostly at AAA Chattanooga and saw four games at Nashville.