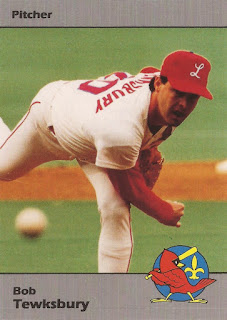 Bob Tewksbury threw a one-hitter in this August 1990 game for the Cardinals and had a perfect game going into the eighth inning, according to The Los Angeles Times.

But Tewksbury knew he couldn't celebrate it too long, he said, according to The Times.

"It would have been nice to go all the way," Tewksbury told reporters, "but I really feel good about the way I pitched. It will probably feel good for four more days, then it'll be time to pitch again."

Tewksbury pitched again many times after that. In his fifth season with time in the majors that year, Tewksbury went on to play some of his best in eight more. In one season, 1992, he even made the All-Star team and came in third in the Cy Young balloting.

Tewksbury's career began in 1981, taken by the Yankees in the 19th round of the draft out of Rutgers University.

In 1986, he made the Yankees. He went 9-5 over 23 outings, 20 starts, and turned in a 3.31 ERA. That April, his presence was felt quickly with a tight inside pitch to the Royals' Willie Wilson, hitting Wilson in the shoulder, according to UPI.

"There was no way I was trying to hit him," Tewksbury told UPI after the ensuing benches-clearing brawl as Wilson charged the mound.

Tewksbury moved to the Cubs in mid-1987 in a trade that sent Steve Trout to the Yankees. After an abbreviated 1988, he signed with the Cardinals for 1989.

Tewksbury picked up those 16 wins and his All-Star birth with a fastball that averaged just 84 mph, according to The New York Times.

"The whole key to pitching is not tricking people, it's the fastball, or the location of the fastball," Tewksbury told The New York Times that June. "It's still the hardest pitch to hit in baseball -- if it's put in the right place. You can't hit both the outside fastball and the inside fastball simultaneously. You have to hit one better than the other and it's just the job of the pitcher to find out which one that is."

Tewksbury continued with the Cardinals through 1994. He then moved to the Rangers for 1995 and the Padres for 1996. In 1998, with the Twins, Tewksbury stopped Mark McGwire with slow pitches - 44 mph pitches.

Tewksbury ended his career that year having seen 13 big league seasons. He went 110-102 overall and had a career 3.92 ERA.

He has since gone into the mental skills and conditioning side of baseball. He worked with the Red Sox in that role from 2004 to 2016. He signed with the Giants as mental performance coach for 2017.

Tewksbury uses his masters in sports psychology in his job, as well as his vast experience as a player, according to The San Francisco Chronicle.

"There's nothing these guys will go through that I haven’t done," Tewksbury told The Chronicle. "I've been in the National League. I've been in the American League. I've had two surgeries. I got demoted seven times. I got traded. I got released. I've ridden the buses. I've raised kids while playing. I've been away from home and learned the struggles of family dynamics and travel. I've done it all."
1990 Minor League Tally
Players/Coaches Featured: 2,731
Made the Majors:1,043-38.2%-X
Never Made Majors:1,688-61.8%
5+ Seasons in the Majors: 432-X
10+ Seasons in the Minors:263
Posted by Steve78 at 11:32 PM