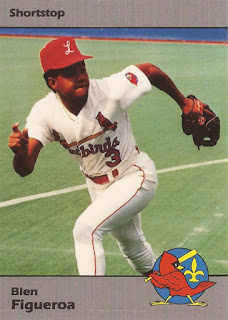 The Florida State Seminoles fell short in the 1986 College World Series, losing in the championship game to Arizona.

Helping them get there, though were two players especially, one of them shortstop Bien Figueroa, Florida State coach Mike Martin told The South Florida Sun-Sentinel.

"The key to us this year was that we had tough pitching and tough defense, especially from our middle infield," Martin told The Sun-Sentinel. "(Second baseman) Luis Alicea and Bien Figueroa stayed healthy all year long, and frankly, without them we couldn't have gone as far as we did. Had they been hurt, we had no one to back them up."

Figueroa had already helped himself to a fifth-round selection by the Cardinals in that June's draft. He went on to help himself to the major leagues, all of 12 games there, a stint helped at one point by chicken pox.

And he's gone on to an even-longer post-playing career as a minor league hitting coach and manager.

A native of the Dominican Republic, Figueroa was drafted out of Florida State at the age of 22. He played that first year at short-season Erie, hitting .237. He hit single-A Springfield in 1987, hitting .278 and hitting the same in 1988 at AA Arkansas.

He made AAA Louisville in 1989, a team for which he would play for, with some notable exceptions, for the next five seasons. St. Louis, of course, had no need for a shortstop, with Hall of Famer Ozzie Smith on the roster.

By 1992, Figueroa was still in Louisville. He also got his first call-up in mid-May. He got his first major league hit May 17, a single, scoring on a grand slam.

Figueroa was called up again the next month, when Smith went on the disabled list after coming down with chicken pox. Figueroa got into five games then and five more after a September call-up, ending his major league career.

Figueroa played four more seasons with five clubs, all in the minors, with the Cardinals, Expos, Rangers, Orioles and Rockies, before finally ending his career in 1996.

He started his coaching career the next season, as hitting coach with the Orioles at AA Bowie. He has managed or coached almost every year since.

In 2006, he was in his second year managing single-A Frederick, talking about one of his players getting out of a slump and delivering the game-winner.

""He has been struggling, but he got a fastball in the middle of the plate and hit it good," Figueroa told The Frederick News Post of player Pete Shier. "To win, everyone has to help. You have to have guys come off the bench to do the job."

Figueroa's son Cole Figueroa is currently playing in the minors himself, at AA Montgomery in the Rays organization for 2011.