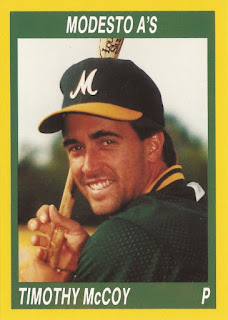 That loss sent McCoy's record to 7-1 on the year.

At Tacoma, McCoy got eight outings, five starts. He went 0-5 with an 8.46 ERA. He committed three errors in relief in a May game and had a bad start in a June game. McCoy returned to Tacoma for 1991, but got into just four games, ending his career.