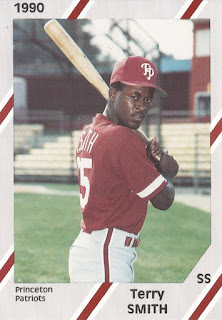 The Stanhope-Elmore Mustangs remained quiet for much of this first part of this November 1987 game, that is until Mustang quarterback Terrell Smith dropped back to pass, according to The Anniston Star.

Smith connected on the third-quarter pass for a 75-yard touchdown, The Star wrote. Smith threw another three-yard pass later for a second touchdown, but it wasn't enough.

Smith went on from Stanhope-Elmore to turn pro in another sport, baseball. But his career there, for Smith, likely wasn't enough. Assigned to rookie ball, Smith's pro career lasted all of five games. He picked up a single pro hit.

Smith's career began and ended in 1990, taken by the Phillies in the 27th round of the draft out of Stanhope-Elmore in Alabama. Smith is also credited as Terry Smith.

As a senior at Stanhope, Smith won all-state honors in football as a quarterback. But it was in baseball that he signed. He signed with the Phillies shortly after being drafted.