Rick Huisman, Own Memories - U6 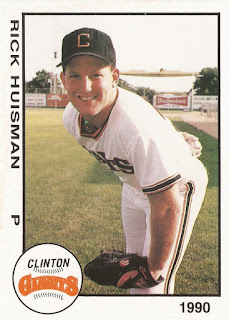 The highlight of Rick Huisman's initial call up to the majors in 1995, he recalled years later, lay in a simple game of catch.

"I got called up from Omaha and came to Kansas City," Huisman told The Kansas City Star in 2012. "We had one home game and then flew out that night to play a series in Texas. The first time I took a step into the Ballpark in Arlington, Jeff Montgomery and I played catch together, and that's a memory that will always be with me."

Huisman ultimately made memories over two major league seasons and a minor league career that spanned more than a decade. He's since gone into a field where he helps youth in Grand Rapids, Mich., make their own memories as executive director of the local Boys and Girls Clubs.

Huisman's long career in baseball began in 1990, taken by the Giants in the third round of the draft out of Lewis University in Illinois.

Huisman started with the Giants at short-season Everett and single-A Clinton. He went 6-5 overall, with a 2.11 ERA.

He made high-A San Jose in 1991 and  led the minor leagues in strikeouts with 216. He also led the league in wins, ERA and winning percentage. He became the only pitcher to lead the league in all four categories.

MiLB recounted Huisman's season in 2007, noting his "quadruple crown" and his dominance of the league that year.

"He just controlled every game he pitched," Chris Lampe, part of the San Jose ownership group, told MiLB. "He just had an awesome fastball and was the most dominating pitcher I've ever seen in the Cal League. The guy was unbelievable."

He then made AA Shreveport and AAA Phoenix in 1992. He got his call-up to Phoenix after the AA all-star game, according to The Colorado Springs Gazette Telegraph.

"I got home at 4:30 in the morning and had to pack up my life," Huisman said, according to the paper. "I took a cold shower, and I was on my way. I only had one hour of sleep, but the adrenaline got flowing, and it took over."

His time with Phoenix, however, saw Huisman injure his shoulder on a pitch home. The injury led to off-season surgery, according to The Star.

Huisman moved to the Astros system in late-1993 via waivers and the Royals in late 1995 to complete a trade. After a brief stint at AAA Omaha, Huisman made the Royals as a September call-up.

Huisman got into seven games for Kansas City that year. He gave up eight earned in 9.2 innings of work. He then returned to the Royals for another 22 relief outings in 1996. He went 2-1, with a 4.60 ERA and one save.

Huisman continued in the minors for five more seasons, playing at AAA with five different organizations. He saw his last time in 2001 between AAA Rochester and Mexico.

Huisman has since settled in Michigan. He served as Chief Operating Officer of Grand Rapids-area florist Eastern Floral. In 2012, he took over as executive director of the local Boys and Girls Club.

"I am thrilled to lead a team of passionate staff and volunteers," Huisman told The Rapidian of Grand Rapids after taking his new post. "Every child needs a safe, comfortable place where they can nurture their talents, meet new friends, study or just play a game."
1990 Minor League Tally
Players/Coaches Featured: 2,673
Made the Majors:1,029-38.5%-X
Never Made Majors:1,644-61.5%
5+ Seasons in the Majors: 426
10+ Seasons in the Minors:262
Posted by Steve78 at 1:00 PM