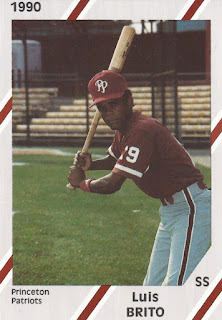 Luis Brito explained to The Spartanburg Herald-Journal in 1993 just how far his minor league salary with his single-A squad went.

Brito, a native of the Dominican Republic, measured it by what he could send home.

"Every 15 days, I send money home by Western Union," Brito told The Herald-Journal. "I get 12 1/2 pesos for one American dollar. It’s a pretty good living."

Brito made that living at Spartanburg in his fifth pro season. He went on to play in 11 pro campaigns. He made AAA, but he never had the chance to make a living in the majors.

Brito's career began in 1989, signed by the Phillies as an amateur free agent out of his native Dominican Republic.

Brito started with the Phillies at rookie Martinsville. He got into nine games there, then moved to rookie Princeton for 1990. He singled in a run in a July game and hit .242 overall.

Brito spent 1992 between Spartanburg and high-A Clearwater. He gave his team a lead with another single in a May game for Spartanburg.

Brito made AA Reading in 1994. He went 1 for 4 in an August game, scoring once. He homered in his first game for the club, tying the game.

He returned to Clearwater for 1995 before moving to the Braves system and high-A Durham for 1996. He played 1997 at AA Greenville, going 2 for 3 in an August game.