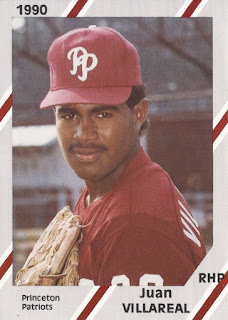 Juan Villareal did the best of Princeton's three pitchers in this August 1990 game, but it wasn't nearly enough.

Villareal threw two shutout innings against rival Kingsport, according to The Bluefield Daily Telegraph. He gave up a single double.

By the time Villareal took the mound, though, Princeton already found itself on its way to an 8-1 defeat, according to The Daily Telegraph.

While Princeton's chances of winning that day were nearly over by the time Villareal took the mound, Villareal's pro career also neared its end. Villareal played that one season as a pro. He didn't get another.

Villareal's career began and ended that year in 1990, apparently signed by the Phillies out of his native Panama. He only played at co-op Princeton and records do not specify whether the Phillies signed him or another Princeton contributing club, like the Tigers.

There is also a question about the spelling of Villareal's name. He is credited on his card and in The Daily Telegraph as Juan Villareal. The two baseball stat sites spell his name Juan Villarreal.