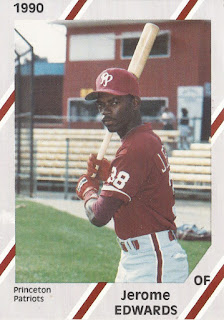 Edwards used his own on-field aggressiveness to play seven seasons as a pro. He made AA, but he never made the majors.

Edwards' career began in 1990, taken by the Phillies in the 13th round of the draft out of Jackson State University. Edwards is also credited as Jay Edwards.

He played 1992 at single-A Spartanburg, scoring on a groundout in a September playoff game. He made high-A Clearwater in 1993. He picked up three hits in a May game and went 2 for 5 in a June contest.