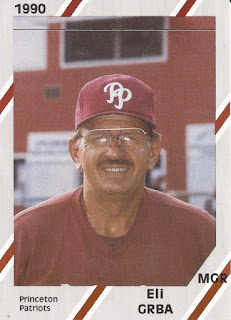 Managing his first professional team at Reno in 1989, Eli Grba passed along knowledge gained both on the field and off, he told The Los Angeles Times that August.

The lessons he learned on the field stemmed from the five seasons he played in the majors from 1959 to 1963. The lessons off it, according to The Times, he learned through his lifelong battle with alcoholism.

"I tell these guys to be prepared for when it's over," Grba, sober eight years, told The Times. "After this glorious life of baseball, there is still a lot of life left. It took me a long time to grow up. I don't want these kids to make my mistakes."

Grba played in the majors with both the Yankees and the Angels. But his addiction to alcohol hampered his career and ultimately sent him out of baseball.  He later sobered up and returned for a brief run as a minor league coach and manager, including managing rookie Princeton in 1990.

The Times chronicled Grba's comeback story in 1989. Grba later chronicled it himself in a book published in 2016, titled "Baseball's Fallen Angel."

Grba's career in baseball began in 1952, signed by the Red Sox as an amateur free agent out of high school in Chicago.

Grba played his first four seasons in the minors for the Red Sox before being traded to the Yankees. He debuted in the Bronx in 1959.

His time in the Bronx led him to be invited years later to the Yankees' Old Timers Day in 2008. Asked by The New York Post how he felt to be included, Grba replied "small."

"You have (Darryl) Strawberry out there. The other guys were there. Geez, do you really belong here?" Grba told The Post. "But yeah, I do, because in 1960 I had a pretty good year with them."

Grba moved to the Angels for 1961. The team made him the first selection in the expansion draft, the first Angel.

Grba got into 12 final games for the Angels in 1963, ending his big league career. His professional career then ended four years later.

Grba began drinking in high school and that continued through his major league days. His addiction then helped end those days. By 1981, he lost his 1960 American League Championship ring to borrow $150, according to The Reno Gazette-Journal.

He last took a drink July 31, 1981, and has maintained his sobriety in the decades since, according to a 2016 story. He credits his change to a religious experience.

Grba got back into baseball as a coach in the minors in 1982. He took over as manager at Reno after an earlier coaching stint, in 1989. He then coached at rookie Princeton in 1990. He later served as a scout.

Grba published his book in 2016, at the age of 81. His book is available on Amazon. To The Florence Times Daily in Alabama, Grba explained that he wanted to tell his story - and help others.