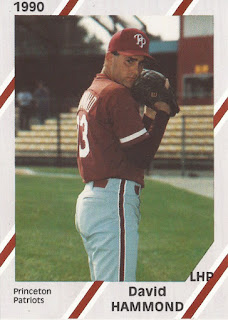 David Hammond started his 2003 report with a description of a 9-year-old girls soccer game.

He went on in his report for The Great Lakes Radio Consortium to tell of the parents in the stands and the likely "biggest decision of the day" - where to go for lunch afterward.

"But," Hammond continued, "with increasing frequency, the next stop for these kids is not the pizza parlor, but the emergency room. According to the U.S. Consumer Products Safety Commission, nearly 12 million children seek treatment for sports injuries each year."

Hammond assembled that report on youth sports as part of a long career in journalism that has given him the title of "Emmy award-winning producer." He moved on to that career after a brief career in pro sports. Hammond played a single season as a pro. He played it entirely in rookie ball.

Hammond's pro baseball career began and ended in 1990, signed by the Phillies as an undrafted free agent out of Dartmouth College.

With the Phillies, Hammond played his season at rookie Princeton. He got into 21 games, starting one. He got into some early trouble early in an August game, then set down seven batters in a row. Overall, he went 3-5, with a 3.06 ERA. He also saved one game. That season, however, turned out to be his only one as a pro.

Hammond then went into media. In 2017, he continues to run The Hammond Group, a Michigan-based marketing group. He previously ran The Great Lakes Radio Consortium, as well as other media organizations, according to his Hammond Group profile. He's also won many awards for his work.

In 1996, Hammond talked of the radio consortium and its work on environmental topics.

"Rarely do the media make the connection between the importance of, say, a policy decision in Toronto and the health impacts on someone in Duluth," Hammond told The University Record at Michigan. "However, it's that type of approach which is needed to solve many of the environmental problems facing us today. The Consortium will play a pivotal role in facilitating that kind of thinking."
1990 Minor League Tally
Players/Coaches Featured: 2,685
Made the Majors:1,030-38.4%
Never Made Majors:1,655-61.6%-X
5+ Seasons in the Majors: 426
10+ Seasons in the Minors:262
Posted by Steve78 at 9:11 PM