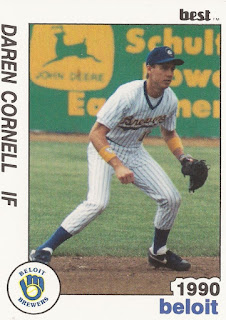 Daren Cornell described his rise in his chosen profession in November 2016 to Voyage LA.

"It was tough in the beginning and at times it still can be but I was driven and worked my ass off learning the craft for a long time," Cornell told the site. "I put in the work so to speak and feel very blessed but it hasn't always been easy."

Cornell became a photographer after previously working as a set painter on movies like 2002's Spider-Man and Se7en. Before that, Cornell played baseball.

Cornell served two seasons in the pros, before an injury sent him on a different path.

Cornell's baseball career began in 1989, taken by the Brewers in the 12th round of the draft out of California Lutheran University.

At Cal Lutheran, Cornell proved a solid player at short, leaving a void for the team when he turned pro.

With the Brewers, Cornell started in the rookie Arizona League. He got into only three games and didn't get an at bat. He served much of the season on the disabled list.

The Southern California native then turned to Hollywood. He got work as a painter on a 1991 episode of Beverly Hills, 90210. In 1995, he painted for Species and Se7en. He stuck with that largely through 2003, according to his IMDB profile.

He then turned to photography. His 2016 Voyage LA profile outlines his beginnings in the field and his rise. By then, Complex.com had already ranked Cornell as No. 39 on its list of the greatest 50 music photographers in 2012.

"He's great at outdoor music photography, whether he's shooting Andrew W.K., the Bloody Beetroots, or the All-American Rejects," Complex wrote. "Catch him at venues like Hotel Cafe or the House of Blues, as he takes the LA music photography scene by storm."