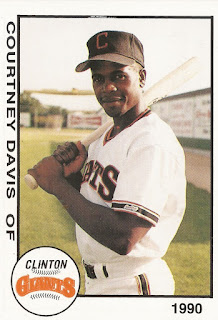 Once a walk-on at UC Irvine, Courtney Davis was now a professional ball player, The Los Angeles Times wrote in 1991.

For Davis, though, his professional career hadn't gone as well as his collegiate one, the one that eventually got him signed.

"I'm struggling," Davis told The Times that June. "The Giants have been giving me ample opportunity to show my skills. It's a matter of me putting it together."

For Davis, he never was able to put it together. That was his second season with the Giants system. It was also his last.

Davis' professional career began in 1990, signed by the Giants as an undrafted free agent out of the University of California at Irvine.

Davis was signed by the Giants after a college career that saw games like the one he had in February 1989, hitting a bases-clearing double in the first.

With the Giants, Davis began at short-season Everett, penciled in in a tentative roster. Davis' stay there, though, was brief, just four games.

The outfielder ended up getting one hit in 11 at bats at Everett. But he also managed to get bumped up to single-A Clinton. At Clinton, he ended up playing 38 games, hitting .210 and stealing 13 bases.