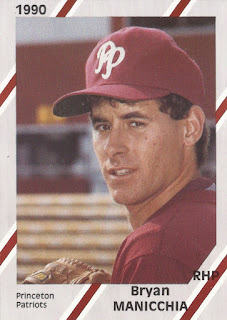 Bryan Manicchia pitched well for rookie Princeton in August 1990, well enough to get noticed, according to The Camden Courier-Post.

Manicchia completed all five saves presented. He also pitched in 17 total innings on the month without giving up an earned run. The month earned Manicchia co-pitcher of the month honors in the Phillies organization, The Courier-Post wrote.

Manicchia went on to play in two more seasons for the Phillies. He made it as high as single-A.

Manicchia's career began that year, signed by the Phillies as an undrafted free agent out of the University of South Florida. He previously attended and played at Hillsborough Community College.

At Hillsborough, Manicchia helped the squad to the 1988 junior college national championship. He attended a 2008 reunion.

He picked up a save in an April 1989 game for South Florida, striking out four of the six batters he faced.

Manicchia started with the Phillies at Princeton. He went 2-1, with a 2.16 ERA. He saved eight. His season also earned him a slot in the September "young-timers" game in Philadelphia.

He then moved to single-A Spartanburg and short-season Batavia for 1991. He saved 11 games total, 10 of those at Batavia. He had a 2.71 ERA between them.