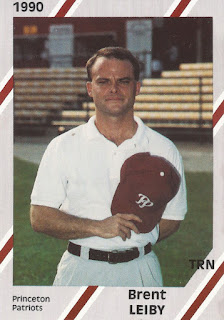 Brent Leiby described to The Rochester Democrat and Chronicle his job as trainer for the short-season Batavia Clippers.

His job in the Phillies organization entailed more than just athletic training, he told The Democract and Chronicle.

"I went to college for athletic training," Leiby told The Democrat and Chronicle, "but treating players takes up only about 20-25 percent of my time. I'm helping them with their banking. They tell me if they are having problems with their families or their girlfriends or with homesickness."

Leiby served as a trainer in the Phillies organization then in high school and college. But years later, he ran into some problems of his own, before continuing on with his training career.

Leiby started with the Phillies in 1990 at rookie Princeton. He later served as trainer at Batavia and at AA Reading.

He later served as trainer at Reading High School. In 2006, he moved to Warwick High School in Lititz, Pa.

Leiby continued there until 2011, when he was accused of taking money from the athletic director's office, according to ABC27 News and Lancaster Online. He was charged. The outcome of the case wasn't available.