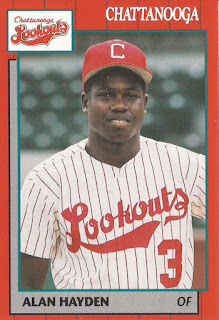 "I think he's got the possibility of going to the major leagues in a few years," Charles Leftin told The Northerner at season's end. "It's just a matter of getting a little more experience."

Hayden went on to get more experience, including time at AAA. But, in six seasons, Hayden never made the majors.

Hayden's career began in 1985, taken by the Mets in the 19th round of the draft out of Northern Kentucky.

At Northern Kentucky, Hayden stole 60 bases in his only year at the school, 1985. The mark is still a school record for a season and sixth-best for career.

"I think he's kind of the catalyst," Hayden's coach Bill Aker told The Cincinnati Enquirer of Hayden that May. "With the speed he has, and he'll open up the offense for you as well."

He made AA Jackson in 1987. He knocked a two-run double to beat Tulsa in a June game. He also doubled and scored in a September playoff game. He stole 64 bases that year between Jackson and single-A Lynchburg.

Hayden returned to Jackson for 1988, while getting a brief three-game look at AAA Tidewater. He stole another 65 bases on the year.