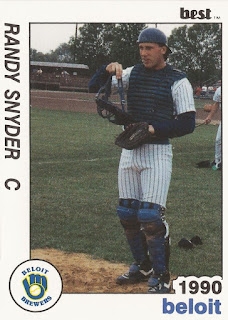 Randy Snyder started his pro career as a second-round draft pick, but he didn't start his career off strong, he told The Deseret News later.

He played through four seasons in the Brewers organization, briefly making it to AA El Paso in 1991. But, after an attempt to turn the catcher into a pitcher in spring 1992, Snyder found himself playing at independent rookie Salt Lake.

"You have to have skills and a break together," Snyder told The News. "I was given the break, but I wasn't playing well. I don't know if I jumped into pro ball with aggressiveness, but I found it last year."

Snyder made it back into affiliated ball for 1993, even playing at AAA Edmonton for the Marlins. In seven total professional seasons, Snyder never made it up to the majors.

Snyder's career began in 1988, taken by the Brewers 54th overall out of Washington State University.

Snyder hit a home run for Washington State in a May 1987 win. He also regularly served as John Olerud's catcher.

With the Brewers, Snyder started at single-A Beloit. He got into 29 games, hitting .196. He played 1989 between single-A Stockton, rookie Helena and the Arizona League. He hit .254 overall in 77 games.

Snyder got his brief look at AA El Paso in 1991, then played the rest of the year at high-A Stockton. He scored on a wild pitch in a May game for Stockton.

Snyder played his season at rookie, independent Salt Lake in 1992 and played well enough to catch on with the Marlins for 1993.

Snyder's final pro time came in 1995, with the Rockies at AA New Haven and high-A Salem, ending his career.

Snyder returned to the field at Washington State in 2013 as the team retired Olerud's jersey.