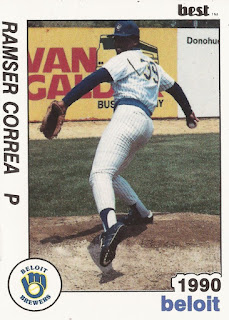 Making the major leagues was important to Ramser Correa, just not as important as his faith, he told The Los Angeles Times in 1996.

A Seventh Day Adventist, Correa couldn't pitch from sundown Friday to sundown Saturday, something that had come up over his career to that point, The Times wrote, and Correa was fine with that.

"If it comes down to my religion or making the major leagues," Correa told The Times, "the major leagues will have to go. It's not that I don't love the game, but I'm not going to sacrifice my beliefs."

Correa spoke to The Times starting his 10th season in the pros. He played in more, but he never made the majors.

Correa's career began in 1987, signed by the Brewers as a 16-year-old free agent out of his native Puerto Rico.

The brother of major leaguer Edwin Correa, Ramser Correa was a sought-after sign. He went 6-0 in a Puerto Rican amateur league, with a 1.79 ERA in seven complete games, according to UPI.

The UPI note did not include the terms of the Brewers deal, but Correa's contract demands raised some eyebrows in May 1987. His religious requirements aside, Sports Illustrated wrote Correa asked for $225,000, a major league contract by 1990, plane tickets home and two cars.

Correa started with the Brewers at rookie Helena. He played there his first three seasons as a pro, getting into a high of 13 contests in 1988.

Correa briefly made AA El Paso in 1993, his final year in the Brewers system. He then played 1994 in the Indians system and arrived with the Dodgers in 1995. He saw his first brief look at AAA that year at Albuquerque and returned there for half of 1996.

Correa finished out his affiliated career in 1997, with nine games at high-A Vero Beach. He's then credited as finishing out his playing days in 2000 between Mexico and independent Atlantic City.

In 2006, Correa served with his older brother as a teacher and coach at Edwin Correa's Puerto Rico Baseball Academy and High School, a new approach to developing young talent and getting kids education, according to The New York Daily News.