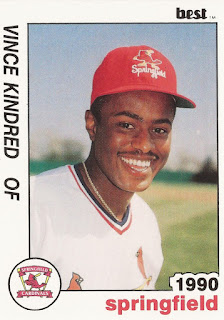 Vince Kindred provided all the offense his rookie Johnson City team needed this night in August 1986, according to The Burlington Daily Times News.

With two men on and nobody out in the first inning, Kindred knocked one over fence, The Daily Times News wrote.

Kindred's rookie Cardinals went on to win that game 4-1. Kindred, himself, went on to play a total of four seasons as a pro. In a career slowed by injury, Kindred made it as high as high-A, but no higher.

Kindred's pro career began that year in 1986, taken by the Cardinals in the seventh round of the draft out of Troy University in Alabama.

Kindred started with the Cardinals at Johnson City. He hit .329 over 42 games, knocking a total of 10 home runs.

Kindred lost all of 1988 to injury, the Cardinals maneuvering so no one would take him in the minor league draft.