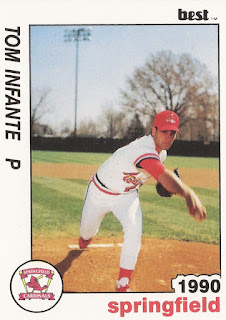 Tom Infante put up some good numbers at the University of Cincinnati and some not so good ones.

Infante completed 10 games during his four years at the school, tied for 17th overall at the school, according to a 2012 list. He also threw a shutout and appeared in 185 innings.

He also allowed enough hits, runs and earned runs to make top-20 career lists at the school, according to the 2012 list.

But Infante put up enough good numbers at Cincinnati - and a tryout - to sign as a pro. His pro career lasted two seasons. He made it as high as single-A.

Infante's career began in 1989, signed by the Cardinals as an undrafted free agent out of Cincinnati.

Infante signed with the Cardinals at a tryout camp, according to his Best card. Assigned to short-season Hamilton, he earned his first professional win in relief by throwing two perfect innings.