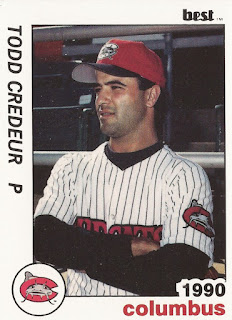 The Lafayette Daily Advertiser recalled in 2016 Todd Credeur's time at the University of Louisiana-Lafayette, just not for the best reasons.

Credeur, who pitched for the school from 1982 to 1985, did so in this April 1984 game. Credeur hit one batter, then later an opposing player retaliated with a forearm while he covered first, The Daily Advertiser wrote as part of a feature on the biggest brawls in the history of the university's Tigue Moore Field.

"It was worse than the South Alabama brawl (in 1992)," former Credeur teammate Garrett O’Connor recalled to The Daily Advertiser in 2016 of the ensuing chaos. "There was no security and the umpires couldn't control it. The fight lasted so long that they were able to dispatch three university police units and four units from the Lafayette police department."

Credeur went on from Louisiana-Lafayette to a pro career that lasted five seasons. He made AA, but didn't make it higher. He appears to have since gone on to another career, one where he's been the one responding to calls, serving with a Louisiana sheriff's department.

Credeur's career began in 1986, signed by the Astros as an undrafted free agent out of Louisiana-Lafayette.

Credeur started with the Astros at single-A Asheville. In 22 starts, he went 13-2, with a 4.01 ERA. He picked up one of his two losses in May, giving up four earned, including a two-run home run.

Credeur soon returned to Louisiana and he joined the Lafayette Parish Sheriff's Office, where he has spent his time since.