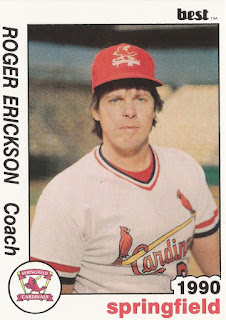 Fresh off a quality seven-inning outing against the Athletics in 1982, Roger Erickson told UPI he believed similar outings were to come.

"I've thrown the same since I've been here," Erickson told UPI, referencing the trade earlier that year that sent him from the Twins to the Bronx. "I figured I'd start when I got here. All I needed was a chance to get into the rotation."

Erickson turned in perhaps his best record since his rookie campaign that year, going 8-8 in his fifth year in the bigs. He played in one more season, continued sporadically in the minors then briefly saw time as a coach.

Erickson's career in baseball began in 1977, taken by the Twins in the third round of the draft out of the University of New Orleans.

Erickson started with the Twins at AA Orlando. He went 8-4, with a 1.98 ERA. He then made Minnesota the very next year.

Erickson debuted with the Twins April 6, winning his first outing. In his second, he threw a complete-game, giving up a single earned run. He went 14-13 overall in 37 starts, with a 3.96 ERA.

That August, Erickson went 10 innings in a 6-5 win, after allowing three runs in the first.

"I was a little rough the first inning," Erickson told UPI afterward. "Except for a few pitches I'd like to have back, things went pretty well."

Traded to the Yankees in mid-1982, Erickson went 4-5 down the stretch, then returned for five final outings in 1983.

Erickson is credited with playing in three more minor league seasons, 1984, 1987 and 1989. He then signed on with the Cardinals as a coach, spending 1990 with his hometown single-A Springfield Cardinals.