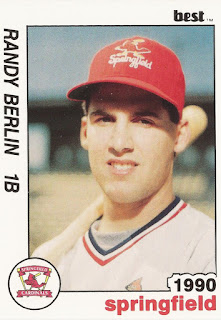 "We look at it two ways," Berlin told The Daily Gazette. "He threw off our timing a little bit, but we knew he would throw off his own team's timing."

Berlin also looked at a sixth-inning offering from that same pitcher and deposited it over the fence in the Albany-Colonie win, The Daily Gazette wrote.

Berlin helped his team to that win in his fifth season as a pro. He played part of another season in independent ball. He never made it higher than AA.

Berlin's career began in 1988, taken by the Cardinals in the 25th round of the draft out of Virginia Tech. He went to Virginia Tech out of Wheaton High School in Maryland.

He won all-Metropolitan honors at shortstop for Wheaton n 1985. In summer ball that year, Berlin showed off his hitting. He hit .600 by late-July, with six home runs, according to The Washington Post.

"I've been concentrating more," Berlin told The Post. "Hard work pays off and everyone on the team has been contributing to our success."

Berlin won all-conference honors at Virginia Tech in 1988, picking up 86 hits, 16 stolen bases and a .381 average on the year. All three numbers led the team.

He started 1990 at single-A Springfield, then moved to the Orioles mid-year and played six games at AA Hagerstown. He went 2 for 17 at AA.

Berlin then played his final year of affiliated ball in 1991 at high-A Frederick. He hit .233 in 84 games - and got a kiss from Morganna the Kissing Bandit.

After three seasons out of the game, Berlin returned for 1995 with independent Albany-Colonie. He hit .304 in 51 games. His final pro season came in 1997 for independent Aberdeen. In 52 games, he hit .265, ending his career.