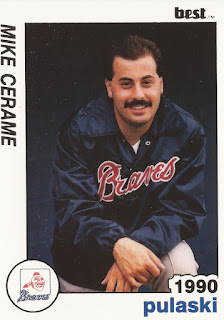 Among the Kissimmee Astros' bat boys in 1994 was a bat girl. The girl, 16-year-old Cami Jones, was part of a baseball family that saw three of her brothers also be bat boys, according to The Orlando Sentinel.

To The Sentinel that July, team trainer Mike Cerame vouched for the girl's credentials.

"She's been around baseball long enough to know whats going on," Cerame told The Sentinel.

Cereme has been around baseball - and other sports - now for a long time himself. He started as a clubhouse manager, then turned athletic trainer in the Braves and Astros organization. He's since worked in sports medicine and as a trainer in college.

Cereme's career began in 1985 as a clubhouse manager for his hometown Rochester Red Wings. He stayed there for four seasons before joining the Braves as a trainer at rookie Pulaski.

Along the way, Cereme graduated from Monroe Community College in Rochester and Eastern Kentucky University. He later received a masters from Eastern Kentucky in physical education and sports administration.

Cerame served at Pulaski at least through 1991. He then joined the Astros and served as trainer at Kissimmee for 1994.

He went on to serve as head trainer at Fredonia State University, where he also helped out at Buffalo Bills training camp. He then worked at University Sports Medicine in the Rochester area and served as trainer at his old high school, Aquinas Institute.