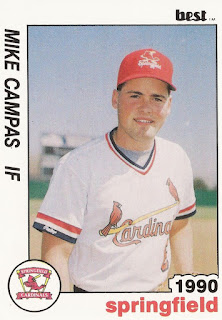 Mike Campas had the Stanford starter's number this day in April 1989, The Stanford Daily wrote.

The University of San Francisco leadoff hitter went 3 for 4 on the day, including an eighth inning double in the 6-4 San Francisco win, The Daily wrote.

Campas went on from San Francisco to play as a pro. His pro career lasted three seasons. He never made AA.

Campas' career began that year in 1989, taken by the Cardinals in the 25th round of the draft out of San Francisco. He started his college career at the College of Marin.

Campas started with the Cardinals at short-season Hamilton. In 53 games, he hit .214. He hit one home run, knocked in 14 and stole four bases.

He played the full season in 1990 at single-A Springfield. He hit .242 that year, belting eight home runs, with 46 RBI. He hit a two-run double in a July game.

Campas then split 1991 between single-A Savannah and high-A St. Petersburg. He hit .245 over 35 games at St. Petersburg, scoring the winning run in an April game.