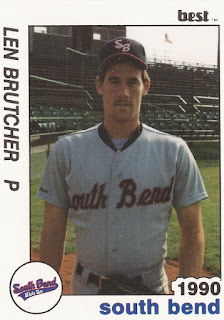 His baseball career over, Len Brutcher tried something new in 1994.

The former White Sox second-round pick returned to college and played basketball for Victor Valley College, according to the San Bernardino County Sun.

In high school, Brutcher won the Gatorade New York State Player of the Year award for 1987-1988.

Brutcher started with the White Sox in the rookie Gulf Coast League. He went 9-1, with a 2.55 ERA over 14 outings, nine starts.

Brutcher moved to single-A South Bend for 1989. He went 5-5, with a 3.74 ERA over 16 outings. He lost time early that season getting extra work in extended spring training.

He returned to South Bend for 1990. He got 22 starts that year, going 11-4. He struck out 11 batters in a May win, giving up two hits. That August, Brutcher slipped on wet grass, the first game after opposing Wausau players tried to cause a rain out and injured his knee.