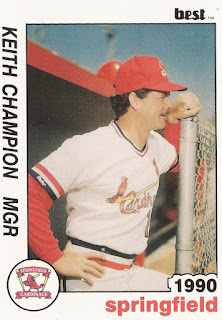 As long as Keith Champion could pay his phone bill and put gas in his car, he told The St. Louis Post-Dispatch in August 1990, he couldn't imagine doing anything else.

Champion served that year as manager of the single-A Springfield Cardinals, marking his third season as a minor league manager.

"There's no glamour to what I do," Champion told The Post-Dispatch. "The only glamour is that I don't have to work a real job for a living."

Champion hasn't done much else since. He's stayed in the game as a manager, advanced scout and special assistant to the general manager.

Champion's long career in baseball began as a player in 1982, signed by the Cardinals as an undrafted free agent out of Southwest Missouri State University.

Champion played a total of three seasons. The catcher started at single-A Gastonia and short-season Erie before moving to single-A St. Petersburg and Springfield. His final season came in 1984. He got into 54 games and hit .239.

He then moved into coaching. He served as hitting coach at Springfield in 1986. For 1988, he became the manager at single-A Savannah. He stayed there two seasons before returning to manage Springfield for 1990.

Keith Champion continued to manage through 1994, when he served at AA Wichita in the Padres system. He then moved to the Cubs and into scouting. He served as an advance scout from 1995 to 1999 with Chicago, then as special assistant to the GM.

In 1999, he explained to The Kitsap Sun the job of an advance scout while on a trip to Seattle.