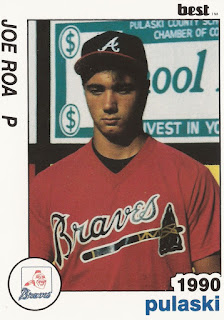 Joe Roa's win in this August 2002 game was no ordinary win, at least not for him.

That's because it was Roa's first major league win in five years.

"This win, in all honesty, means more to me than the first one," Roa told reporters afterward. "That's because I know how hard it is to get up here and stay here."

Roa's career began in 1989, taken by the Braves in the 18th round of the draft out of Hazel Park High School in Michigan.

He started in the rookie Gulf Coast League, moving to rookie Pulaski in 1990. He made single-A Macon in 1991, before moving to the Mets system for 1992.

In one 1997 outing, Roa gave up five runs over five innings. He walked the pitcher with two out in one inning, leading to a rally, according to The Associated Press.

"That's something I've got to get out of right there," Roa told The AP. "What hurts is I've been in those situations before, and I should know how to get out of them."

Going into that year, Roa tried to explain his game to The Allentown Morning Call.

"Intelligence is a big part of my game," Roa told The Morning Call. "This may sound strange and people may disagree, but the more I see you, the better I am."

Roa played one more season and it was his busiest. He got into 48 games for the Twins in relief, with a 4.50 ERA. He played in one more season, six outings at AAA with the Pirates, rounding out his career.