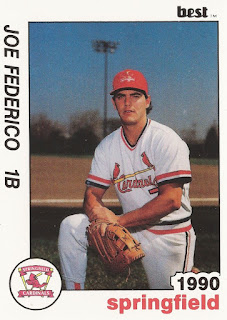 Joe Federico can lay claim to something few in baseball have done, according to the Wikipedia article on the Hamilton Redbirds.

With no outs in the inning of this 1988 contest, Auburn's Kenny Lofton hit one directly at Federico at first. In the ensuing sequence of events, Federico completed an unassisted triple play.

Only 15 players have achieved such a feat in the majors, Federico's feat sent his glove and jersey to the Canadian Hall of Fame. Federico, though, never got the chance to repeat the play in the majors. He played four seasons as a pro. He never made AAA.

Federico's career began in 1988, taken by the Cardinals in the 30th round of the draft out of the University of Nebraska. He also played at Glendale Community College.

At Nebraska, Federico went 3 for 5 with two RBI in a May 1987 game. He then knocked a two-run single in an April 1988 contest. After a May 1988 game, one scout reported Federico had major league power, according to The Oklahoman.

With the Cardinals, Federico started at short-season Hamilton. He hit .233 in 73 games, hitting nine home runs and knocking in 40.

Federico made AA Arkansas for 1991, getting into 48 games there. He walked and scored in an August game. With some time back at St. Petersburg, he hit .217 on the year, marking his final season as a pro.