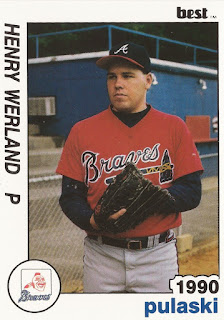 Henry Werland started this June 1991 outing strong. He ended the outing with a win, according to The Savannah Morning News.

Werland pitched three perfect innings before giving up his first hit, The Morning News wrote. He then left after five innings with a 1-0 lead. His Macon Brave relievers then went on to complete the seven-inning win and shutout.

Werland had that start in his second season as a pro. It was also his last season. He played just those two years, never making AA.

Werland's career began in 1990, signed by the Braves as a free agent out of the University of Texas at Austin.

At high-A Durham, he pitched even better. In eight outings, seven starts, Werland put up a 1.98 ERA and a 5-2 record. He started off with a loss in late July. Despite his seeming success, that second season was Werland's final season as a pro.