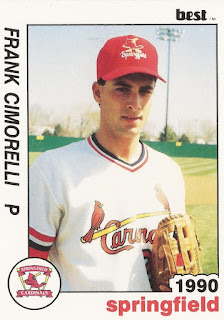 Frank Cimorelli's young career seemed almost stalled at single-A Springfield. He spent three seasons there, spending time as a starter and later as a reliever.

He recalled to The St. Louis Post-Dispatch that he pitched through it and kept going.

"The thought never crossed my mind," Cimorelli told The Post-Dispatch of the possibility of quitting. "It was very frustrating, but only in that they didn't think I could be the pitcher that I thought I could."

It turned out that Cimorelli could pitch. Once he switched to relieving, he started to move up. In 1994, he made it all the way up to the majors. Cimorelli got into 11 games for the Cardinals in 1994, marking the extent of his big league career.

Cimorelli's career began in 1989, taken by the Cardinals in the 37th round of the draft out of Dominican College in Orangeburg, NY.

Cimorelli started with the Cardinals at rookie Johnson City. In 12 starts, he went 2-4, with a 4.57 ERA. He overcame a tough start to throw a complete-game, five-hitter, according to his hometown Poughkeepsie Journal.

"I'm pitching much better now," Cimorelli told The Journal in early August. "I feel much more confident to hit spots and let the batters put the ball into play."

Cimorelli moved up to AA Arkansas and AAA Louisville for 1993. He made the bigs the very next year.

He debuted with the Cardinals in late April, getting into those 11 games that year. In 13.1 innings, Cimorelli gave up 13 earned runs, for a major league ERA of 8.78.