Dennis Wiseman expressed excitement at arriving at AA; He later made AAA, but not the bigs 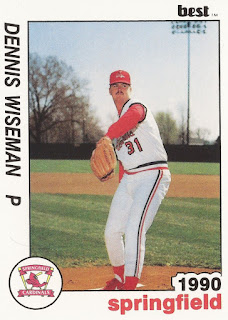 Dennis Wiseman expressed excitement as he moved to AA Arkansas in 1991, according to his hometown Baltimore Sun.

"I'm here," Wiseman told The Sun, which described his demeanor as joyful.

Wiseman later made AAA Louisville, but he never made the majors. Years later, though, his arrival on a baseball field wasn't welcomed by all.

Invited back to throw out the first pitch at his old college, one newspaper pointed out a shameful and destructive part of his early post-playing life: Wiseman is a registered sex offender.

Wiseman's career in baseball began in 1989, taken by the Cardinals in the 30th round of the draft out of Florida International University. He's also credited as Denny Wiseman.

Wiseman started with the Cardinals at rookie Johnson City. He went 4-3 in 12 starts, with a 2.65 ERA. Years later, he recalled his baseball card from Johnson City as his favorite.

"I couldn't believe all the hard work through the years actually came to reality," Wiseman told the site Baseball Cards Come to Life! "Seeing my picture on a card solidified that I was a 'pro.'"

At Arkansas in 1991, he went 6-15, with a 4.16 ERA. He returned to Arkansas for 1992, then made AAA Louisville for 1993. He threw a complete game for a June win, picking up an early three-run lead, according to The Louisville Courier-Journal.

"Getting that cushion really helped," Wiseman told The Courier-Journal afterward.

He went 7-9, with a 5.06 ERA at Louisville. That season ended up being his last in affiliated ball. He moved on to independent Duluth-Superior for 1994 and 1995, ending his career.

Wisemen soon returned to Florida, where he went to college, and took a job as baseball coach and teacher at North Miami Senior High School. Then, in May 1997, he was accused of having sex with a 16-year-old girl, a student at his school, according to The South Florida Sun-Sentinel.

Wiseman later received probation, a withheld adjudication. He completed his probation in 2002, but still must register as a sex offender.

In the two decades since his arrest, Wiseman has gone on to a career in radiology. He also returned to Florida International to throw out the first pitch in 2013. His return drew a Miami Herald story that referenced his full past and appeared to become part of a larger spat between FIU and the Herald over coverage.
1990 Minor League Tally
Players/Coaches Featured: 2,625
Made the Majors:1,024-39.0%
Never Made Majors:1,601-61.0%-X
5+ Seasons in the Majors: 425
10+ Seasons in the Minors:261
Posted by Steve78 at 11:21 PM