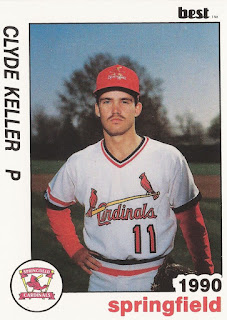 Clyde Keller returned to Florida State University in 2015 as a coach, nearly three decades after he starred there as a pitcher.

After his return, Keller told HerCollege.com what he expected to do.

"I hope that I bring a little bit of experience and knowledge to the game that they may have not heard from before," Keller told the college site. "The main thing for the players is to answer those two questions: Did I get better today? Did I help my teammates get better today?"

Keller's experience included not only his work at Florida State, but also time in the pros and coaching stints in the minors, college and high school. His pro stint lasted four seasons. He never made AA.

Keller's pro career began in 1989, taken by the Cardinals in the 32nd round of the draft out of Florida State. He also played at Sacramento City College.

He threw a four-hit shutout in March 1989 for his third win on the year. By College World Series time, he was 13-0, using his "palmball" to help his team to Omaha.

Keller then threw another four-hitter against Wichita State in a Round 2 win. He later picked up his first loss of the year against the same Shockers, as Wichita State moved on to the finals.

Keller started with the Cardinals at single-A Savannah, getting a game at short-season Hamilton. He threw a no-hitter for Savannah in August, went 5-5 on the season overall. He also put up a 1.60 ERA.

He moved to single-A Springfield and high-A St. Petersburg for 1990. Turned reliever, Keller saved 32 games and turned in a 2.33 ERA.

Keller then returned to Springfield for 1991, saving another games. The Cardinals then sent Keller to the Mets that December in a trade. He got into 14 games at high-A St. Lucie in 1992, marking the end of his career.