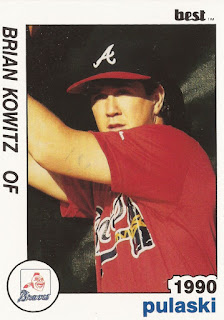 Two-time All-Star David Justice was injured and rookie Brian Kowitz seemed to be filling in just fine, according to The Associated Press and Braves manager Bobby Cox.

That's because the Braves were winning, Cox told The AP after a June 1995 win against the Cubs.

"Sure I'll keep Brian at the top of the order. We're 3-0," Cox told The AP. "He's a scrapper. He knocks in runs, gets on base. We're getting production out of our rookies."

Kowitz' chances in the Braves lineup, however, ended up being limited. When Justice returned later the month, Kowitz' brief major league career was over.

Kowitz' career began in 1990, taken by the Braves in the ninth round of the draft out of Clemson University. He went to Clemson out of Boys' Latin School in Baltimore.

At Clemson, Kowitz played well enough in his 1990 to be named ACC player of the year.

With the Braves, Kowitz played his first season between rookie Pulaski and AA Greenville. He hit .324 in 43 games at Pulaski and .132 in 20 at Greenville.

He played 1991 between high-A Durham and Greenville, doing the same in 1992. In 1993, he played much of the year at Greenville, getting 12 games at AAA Richmond.

Kowitz gave his Greenville Braves a lead in an August 1993 game, helping them on to a win.

"On my third at-bat, I was looking to go to left field,'' Kowitz told The Orlando Sentinel of his home run. "He threw either a change-up or a slider that stayed up."

He returned to Richmond mid-month with a desire to get back to Atlanta.

"The ultimate goal is to get back to the big leagues," Kowitz told his hometown Baltimore Sun. "That's fantasy land. That keeps the fire going. I've gotten a taste of it, so now the fire's blazing."

Kowitz never got back to Atlanta. He finished out the year at Richmond, then played 1996 in the minors between the Blue Jays and Tigers systems. His last recorded pro time came after three years away, in 2000 with independent Aberdeen.

He has since stayed involved in baseball, serving as an instructor in 2015 with The Baseball Warehouse in Owings Mills, Md.