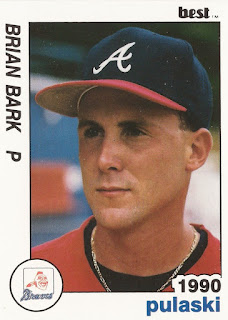 Brian Bark new he had a daunting task: Breaking into the mid-1990s Braves rotation, according to Morris News Service.

At the same time, knew also knew how fortunate he was to be where he was.

"I'm as close as you can get without being there," Bark told the news service in spring 1994. "I guess that's a little frustrating, but then I look at it like a lot of people don't get this far."

Bark eventually did break through, but not that year and not with the Braves. Bark got his call to the majors the next season after moving to the Red Sox. The break through, though, was brief. He appeared in three major league games, the extent of his big league career.

Bark's career began in 1990, taken by the Braves in the 12th round of the draft out of North Carolina State University.

At North Carolina State, Bark showed off his bat in one May 1988 game. He went 6 for 6, with two home runs and five RBI, according to The Gainesville Sun. "This was a day that you dream about," Bark told The Sun after that game.

Bark played his first season with the Braves at rookie Pulaski. The pitcher got five starts there, going 2-2. He moved to high-A Durham for 1991. He also saw time at AA Greenville.

"He's going to pitch in the big leagues," Schuerholz told the Baltimore paper. "But right now there isn't any room on this staff."

Bark continued with the Braves at Richmond into 1995, until he was released that June. He signed with the Red Sox within days. A month later, he was in the majors.

"It's great to be here," Bark told The Hartford Courant after his call, "but I don't know what to expect."

Bark played in one more season, 12 outings for the Mets at AAA Norfolk in 1996, ending his career.