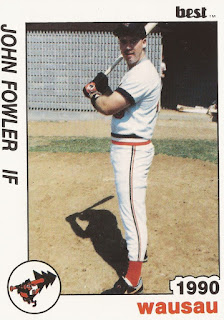 John Fowler is in select company among natives of Frederick, Md.

As of 2014, he remains among only five players in a club history that dates back to 1989 to play for his hometown Frederick Keys, according to the team.

Fowler's career began in 1988, taken by the Orioles in the 36th round of the draft out of Frederick Community College.

Fowler started with the Orioles at rookie Bluefield. The infielder got into 60 games, hitting .206. He also hit three home runs, with 25 RBI.

He returned to Bluefield for 1989, improving his average to .300 and hitting nine home runs. He also largely played at first base.

For 1990, Fowler played largely at single-A Wausau. In 70 games there, his average dropped back to .224. He also saw those seven games at high-A Frederick. He picked up a single hit in 13 at bats. That year marked his final year as a pro.