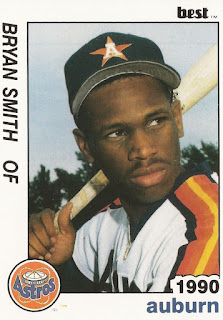 Hot Springs' downtown revitalization task force listened to a lot of people and went through a lot of data, Chamber of Commerce board chair Bryan Smith said at a 2014 press conference, according to ArkansasOnline.

The end result, Smith said at the press conference, was a report on the future of the Hot Springs downtown to be proud of.

"It's an exciting plan," Smith said, according to the site. "It is good to know it is going forward."

Years earlier, Smith worked to be exciting in a different way, on the baseball field. But the excitement of his baseball plan never fully came to be. He played two seasons in the Astros system. He never made AA.

Smith's baseball career began in 1989, taken by the Astros in the 46th round of the draft out of Texarkana College. He played his high school ball at El Dorado High in El Dorado, Ark.

Though drafted in 1989, Smith took his time to sign, agreeing to terms with the Astros just before the 1990 draft.

He played his first year at short-season Auburn. In 62 games, he hit .211. He also knocked in 15 runs and stole nine bases.

His playing days over, Smith returned home to Arkansas. In 2014, he served as purchasing director at Alliance Rubber in Hot Springs and served with the Chamber of Commerce.

Alliance Rubber manufactures rubber bands and employs more than 150 people in Hot Springs, according to TalkBusiness.net

"We are proud to say we manufacture every rubber band we make in the U.S.A.," Smith told TalkBusiness in 2014.