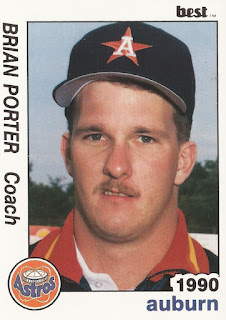 Brian Porter played at short-season Auburn in 1989 and returned there in a different role in 1990, as assistant general manager.

In both roles, Porter needed a place to stay. So, he did like all the other players and boarded with locals. In his case, he boarded with the McNabbs, The Syracuse Post Standard wrote.

"It's just like one big happy family, the Auburn baseball family," Porter told The Post Standard. "Whether you're a ballplayer or staff."

Those two roles appear to be the extent of Porter's professional career. He played that 1989 season and served as assistant Auburn GM in 1990.

Porter's time in the pros began, signed by the Astros as an undrafted free agent out of Eastern Michigan.

The Livonia, Mich., native appears to have pitched for the local Connie Mack team, helping on a two-hitter in June 1983.

He then went on to pitch at Eastern Michigan through 1988, being voted team most valuable pitcher in 1986, according to his Best card.

With the Astros, Porter played 1989 between single-A Osceola and short-season Auburn, getting eight starts in all.

He got one start at Osceola, giving up four earned in six innings. At Auburn, he started seven games, going 3-4, with a 3.28 ERA.