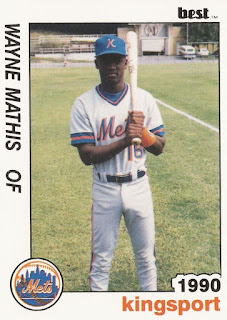 Wayne Mathis' path back to baseball presented itself by chance, according to The Victoria Advocate.

"It was a blessing without a doubt," Mathis told The Advocate years later. "I was trying for years to get into baseball and he made it happen in less than a week."

Mathis went on to a long stint as a scout for the major league scouting bureau. He spoke to The Advocate in December 2015 on the occasion of moving to a scouting job with the Pirates.

Mathis' first stint in baseball began in 1988, taken by the Mets in the 53rd round of the draft out of Cuero High School in Texas.

At Cuero, Mathis also played football, helping his team to the 1987 state championship.

"We just worked, stayed focused and did the things we needed to win on Friday," Mathis told The Advocate years later of that title run.

He then moved to rookie Kingsport for 1990. He got into 34 games there and hit just .160, ending his professional career.