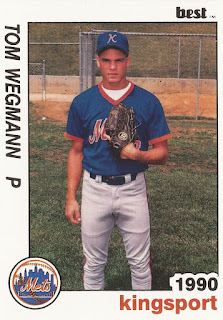 Tom Wegmann pitched well in April 1995 and he did it against his former team, the Norfolk Tides.

Wegmann picked up the win, going five innings and giving up four hits.

"It's kind of nice to do it against them," Wegmann told The Rochester Democrat and Chronicle. "You're always a little more pumped up when you're facing guys you played with, guys you know."

Wegmann played with the AAA Tides over two seasons, before moving to the Orioles and AAA Rochester for two more. He went on to play in eight total pro seasons. He never made the majors.

Wegmann's career began in 1990, signed by the Mets as an undrafted free agent out of Middle Tennessee State University. He is originally from Dyersville, Iowa.

Wegmann played exclusively at Norfolk in 1993 and almost exclusively in relief. He then moved to the Orioles and Rochester for 1994.

In May 1994, Wegmann gave up a home run off a changeup to rival and former fellow Tide Steve Springer.

"I know he knows I throw that pitch," Wegmann told The Democrat and Chronicle afterward. "But you can't change your pitching because you're facing a former teammate."

Wegmann then played 1995 at Rochester and AA Bowie. He spent his final time with the Orioles the next year returning from shoulder surgery, playing seven games between high-A Frederick and the Gulf Coast League.

He finished out his career in 1997 with as a player coach for independent Elmira. That July, he threw a complete game in a 9-2 win.