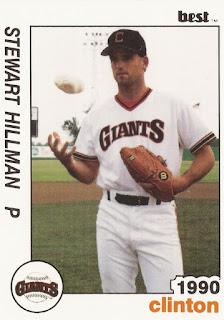 Stewart Hillman grew up in Ontario and went to college in Detroit. In 1988, he played baseball in Korea. And he did so for his home country of Canada in the Olympics.

With Hillman on the pitching staff, Team Canada ultimately picked up one win and two losses at the games.

Hillman then turned pro, getting into his first games the next season in Idaho. Hillman, though, ultimately played just two seasons. He never made AA.

Hillman's pro career began in 1989, taken by the Giants in the 23rd round of the draft out of the University of Detroit Mercy.